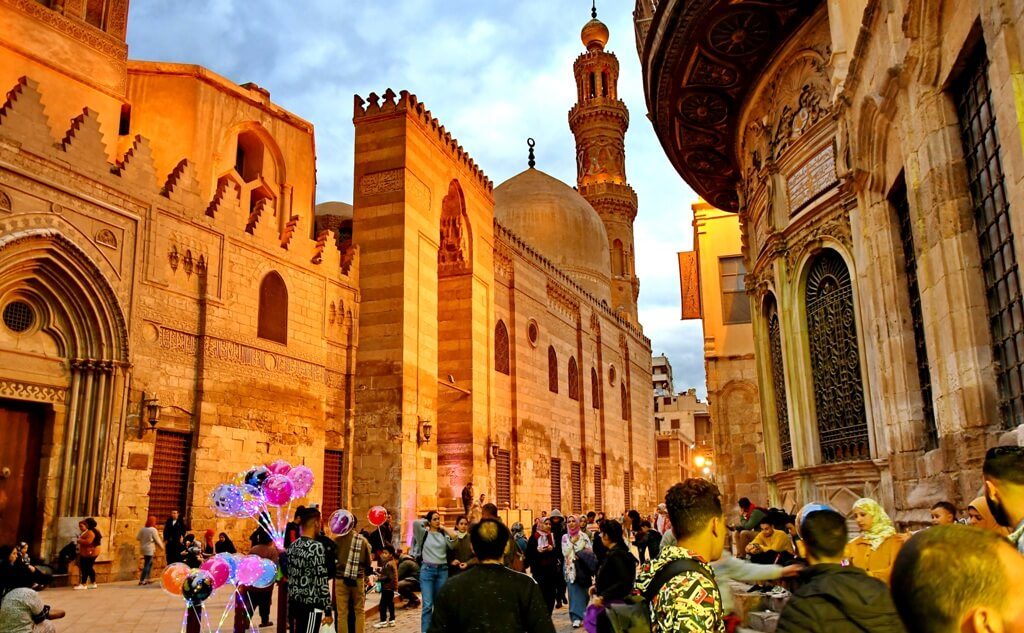 Egypt’s Islamic Attractions show that Egypt was through a golden period of Islamic development when the rest of the world was drowning in the Middle Ages’ gloom. General Amr ibn al-‘as invaded Egypt in 641 AD and built a new city named Al-Fustat, which subsequently became Cairo, the eternal heart of Egypt and Islamic civilization for the following 1200 years. Cairo earned the nickname “City of Minarets” for having the highest concentration of mosques packed with exquisite Islamic architecture. The city has served as an inspiration for many works of art, making it the most popular location for Egypt tours. All of Egypt’s Islamic landmarks represent the Islamic dynasties that governed Egypt at various times, including the Abbasid Dynasty, Fatimid Dynasty, Ayyubid Dynasty, Mamluk Dynasty, and Ottoman Empire. All of Cairo’s one-of-a-kind historical attractions will demonstrate a new definition of beauty; all of Egypt’s Islamic landmarks feature a unique style of architecture found only in the Arab world, as well as a mesmerizing style of decoration in the form of hypnotic Quranic calligraphy written in gold.
There are numerous pages on this website that provide all of the information and specifics on all of Egypt’s major Islamic attractions. Since 1999, Egypt Fun Tours has been the gateway to accessing and learning all of Egypt’s ancient temples’ history and culture. The travel agency is equipped with the finest tour guides, tour operators, drivers, and customer service representatives, as well as several dedicated travel constants who will provide the most suitable accommodations, Nile River cruises, and transportation, as well as anything else you could possibly request at reasonable prices. Egypt Fun Tours earned its excellent reputation through strict booking procedures, safety guidelines, and fair COVID-19 cancellation policies. Investigate the ethereal attraction and magnificence of ancient Egyptian temples.

High taxation and bad governance by the Ikhshidid Abbasids, who had governed Egypt from 905 AD, had devastated the area and its capital, Fustat when ...

Due to severe damage caused by a car bomb assault in 2014, this museum was forced to close its doors to the public for several years, but it has ...

There are 651 buildings from Medieval Cairo listed in the index produced by the Survey of Egypt in 1951 including mosques, Madrasas, mausoleums, ...

The very first mosque ever built in Egypt. Erected in 642 AD (21 AH) by the leader Amr Ibn alas, the commander of the Muslim army in Egypt, the ...

Nearly 1100 years old, this is a part of Islamic Cairo. It was originally designed to sell dry products, and traders would travel from all across ...

The Citadel Of Salah Ad-din

citadel Saladin cairoThe citadel was founded by Salah Ad-din in 1168, and it was completed by his nephew King Al-Aadel. It is located on a high ...

Day Trip to Alexandria From Cairo